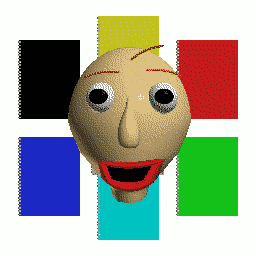 When it begins, the Player will be greeted with Baldi, who will explain how the game works. Once the Player gets into a classroom, they will find a notebook. Interacting with it causes the You Can Think Pad to appear onscreen, with Baldi's face shown explaining how the Player can use the Pad to answer questions. The first notebook will be simple and doable. Baldi congratulates the Player and gives them a quarter (present in Birthday Bash edition) when they have answered all of the problems correctly.

Going to the second notebook, the two questions will be normal but the third is a jumble of randomized numbers and letters. When Baldi says the numbers for the third question, this will prompt a loud glitchy noise rather than a number. The Player can't solve this question (unless using a mod or cheat), so to progress, they must answer it incorrectly, which will jump to the next stage of the game.

Baldi will start chasing the Player with a ruler, and each notebook they collect will prompt him to go faster since the third question is unsolvable (he quite literally reminds the Player that he gets angrier for every problem the Player gets wrong). If Baldi reaches the Player, the game is over.

The goal of this game mode is to collect all 7 notebooks in the classrooms while avoiding or challenging the characters. Right now, there are 5 other notebooks to find.

Once the Player collects all the notebooks, the Player will be greeted with Baldi's voice over the intercom saying the following:

"Congratulations! You found all seven notebooks! Now all you need to do is... GET OUT WHILE YOU STILL CAN!!! Heh-heh-heeeeh!"

During this phase, if the Player reaches one of the exits, it will be closed off at the last second, replaced by a wall with blocks that indicate a rough map of the school, including a "You are here" indicator. The Player must activate three exits, and then leave through the fourth one to win the game. However, it is challenging to complete this task at this point, as Baldi moves extremely fast, and the exits are all around the outside of the school, one being in the cafeteria. Additionally, Arts and Crafters becomes hostile, since the Player has more notebooks than him. That being said, he will charge at the Player if looked at and teleport them and Baldi to the start.

After going to one exit, the whole school will turn red. Two exits result in an ear-splitting pitch-rising static sound playing until the Player wins or loses. Three exits slowly start to increase the sound's pitch in order to stress the Player.

The current mode selection menu. (Google Play and iOS version)
Add a photo to this gallery

Retrieved from "https://baldis-basics-in-education-and-learning.fandom.com/wiki/Story_Mode?oldid=92228"
Community content is available under CC-BY-SA unless otherwise noted.