The Quarter is an inventory item from the Baldi's Basics series.

It is a shiny silver coin with George Washington's face on it, appearing identical to a U.S. quarter.

The Quarter, while looking useless, can actually be used for:

The Quarter is one of the most common items to find, as they can be randomly found in faculty rooms and classrooms, usually with other items. They can be bought at Johnny's Store for 25 You Thought Points.

There are five Quarters. Two of them are in each classroom:

Three of them are in each faculty room:

Quarter in the teaser of Johnny's Store.

Quarter seen being held by It's a Bully's clip hanger. 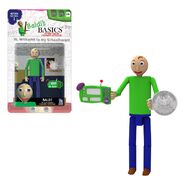 Quarter from the "Rewards" header in the Kickstarter page.