PlaceFace is an unusual character who appears in the Baldi's Basics series as a recurring hidden Easter egg.

PlaceFace was added in Baldi's Basics Classic before all the characters were finished but was not seen from gameplay even since the first released version, V1.0.

As of V1.3.2, it was confirmed PlaceFace exists outside (at the time) non-implemented TestRoom as a deactivated invisible character in the Schoolhouse's left-wing. This is proven by decompiling the game in a Unity program or messing with the level2 file in the game's files.

Once V1.4.1 released, two PlaceFaces appear in TestRoom where the player teleports after inputting 31718 into the You Can Think Pad. One PlaceFace will remain still while the other slowly follows the player harmlessly if he sees them. The code for these PlaceFaces was fixed, but the pre-V1.3.2 PlaceFace still remains invisible, but still working.

If the player clips out of the map in the player spawn location of the demo and goes behind the Super Schoolhouse, PlaceFace can be seen behind the swinging door between two "NO" signs as an Easter egg.

PlaceFace has a same appearance in Baldi's Basics Classic. Another one is in the glitched school in this edition, a massively resized PlaceFace appears in one of the rooms with multiple Playtime frames. He does not move however. 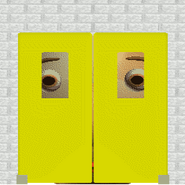 PlaceFace hidden behind the swinging doors as the Easter egg in the Field Trip demo.

PlaceFace in the gaming program during the game's development.

PlaceFace seen behind the swing doors in a screenshot while the game is under development.

PlaceFace used on testing AI with the player.

I'm a CGI Pro Now!
The origin of PlaceFace.