A mystery room appears, containing a rare item inside.

A mystery room has appeared! Find it before it disappears!

The mystery room is one of the events and locations in Baldi's Basics Plus.

When the event occurs, the description shows up, telling the player to find the mystery room since it just appeared.

In the hallways, one or two mystery doors will appear. The door(s) will connect to the mystery room which is completely pitch-black with only posters and windows visible. It contains a random item that is considered rarer than normal, such as a Dangerous Teleporter, An Apple for Baldi, or a Grappling Hook.

While in the mystery room, none of the NPCs can enter the room, unless using a BSODA to push them in. However, there is a chance that Baldi or Principal of the Thing may open the door when Baldi hears the sound that the player makes when opening it, he sees them entering the room or the Principal chases the player breaking the school rules. If the player gets too close to the door in that case, other characters can interact with them.

The door(s) will disappear when 90 to 120 seconds pass. The player can remain inside of the room as long as they like after the door(s) disappear, but will not be able to re-enter it once they leave.

The mystery room always contains An Apple for Baldi and there are two lamps attached to the ceiling. 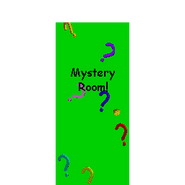 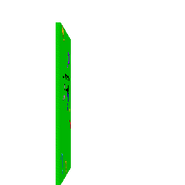 The black texture for the inside of the room.