The mailbox comic is a Baldimore comic created by mystman12. It was drawn far before the development of Baldi's Basics Classic.[1]

In Baldi's Basics Full Game Early Demo, it is seen next to the hallway that leads to the Roto-Hall.

In Grapple Challenge, there are two mailbox comics, one in the hallway that lead to a dead-end and one in the playground.

Note that in Baldi's Basics Plus and Baldi's Basics Kickstarter Exclusive Demo, the comic is generated randomly and can be found anywhere. (except in the Challenges).

Baldi breaks the fourth wall by telling the reader about the mailbox and how he opens it, by using his teeth. 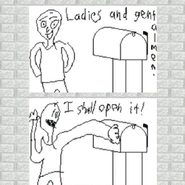 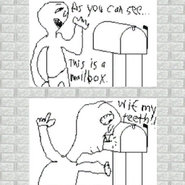