For the location, see Johnny's Store.

The player buying stuff from his shop

In between any floor.

Johnny is a character in Baldi's Basics Plus who runs his store.

Johnny is a human with a design based on a 2D drawing, with pale skin, cyan long-sleeved clothing, and shaggy hair which covers his eyes. His 3D version looks different: he is in a T-pose, his mouth is wide open, he has shorter and lighter hair, and his skin is darker.

He apparently has a benevolent personality, greeting the player upon seeing them, and offering items in exchange for the game's currency. He also seems to have a grim sense of humor, as he talks about starving if the player buys something. He will also frown if the player buys nothing or tries to buy something without enough You Thought Points.

He is the shopkeeper of the store, and will greet the player upon entering. He will offer filled maps, items, and characters to expel. Though, these things will cost You Thought Points in order to purchase them. 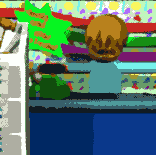 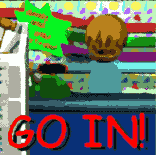 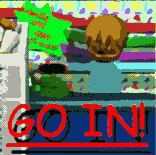 Ditto, but with the lit text. 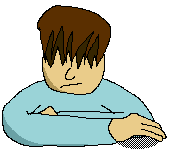 Johnny frowning when the player buys nothing or tries to buy something without enough You Thought Points, or when Johnny mentions his parents. 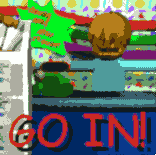 A teaser for Johnny's lines.

Johnny in a Baldi's Basics Plus V0.2 teaser.

Johnny in the image for Baldi's Basics Plus V0.2's announcement.

Johnny in the current Baldi's Basics Plus screenshot.