For the vehicle in Baldi's Basics Plus, see Baldi's bus.

Joe's Ultimate Bus Ride (or JUBR for short) is a virtual pinball game created by mystman12 in Future Pinball that was put on hold before mystman12 decided to enter Meta Game Jam to create what would soon be Baldi's Basics in Education and Learning.

He then decided to make Joe's bus an Easter egg and a reference to his old project.

The wireframe kickout and hidden diverter.

The top of the basic model posted in Twitter.

A promotion art for the old version titled Joe. 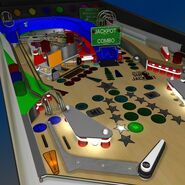 An artwork in mystman12's SoundCloud.

"Look at a redesigned, much more reliable bus lock in Joes Ultimate Bus Ride!"
A gameplay video of the redesign.