Each exit has two potted plants, two windows, and hall lights attached to the ceiling. There is also a hanging sign with red "EXIT" text.

There are four exits in the Schoolhouse. One at the starting point, two in the other hallways, and one in the cafeteria. The exits appear visible but the player cannot go through the swinging door. They will be blocked and lowered when the player answers a problem wrong.

Once the player collects all 7 notebooks, the exits will reappear. Heading to one of the fake exits lowers and blocks it off, a quiet ambience will start playing, and the entire school becomes red and gets dark shadings. Heading to another fake exit makes an increasingly loud bass-boosted noise until the player gets caught by Baldi or wins. When the player reaches the exits except for the last one, they will change into maps, showing a layout of the Schoolhouse.

The player must go to all four exits in any order to win the game. When the player escapes via the fourth exit, a certain ending will appear, depending on the number of math questions the player answered incorrectly.

There is an exit that does not work. This exit is next to a large globe in a faculty room with a Swinging Door Lock, but there is only a sign above the globe and no doors. Reaching this exit does not make the player progress in the game. 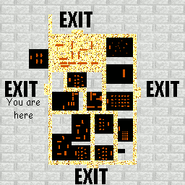 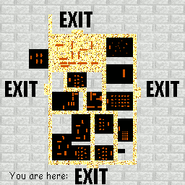 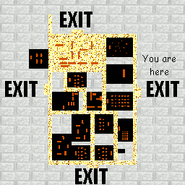 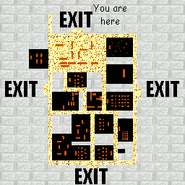 The exit sign at the exits in Classic/Birthday Bash.

The plant pot used for each exit's both sides.

The exit from the current screenshot.

The exit from the pre-updated screenshot.

The exit from the screenshot.