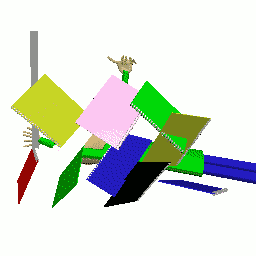 Endless Mode is the secondary game mode in Baldi's Basics. Unlike Story Mode, the objective is not to collect all 7 notebooks and escape Here School. Instead, the goal is to collect as many notebooks as possible until Baldi catches them.

Upon starting, the gameplay is no different until the Player reaches the third notebook. Instead of having an unsolvable third question in Story Mode, each question is answerable, as well as all of the notebooks after. Aside from this, Baldi's behaviour also changes. Answering all three problems correctly in a notebook will slightly decrease his speed, emphasizing the objective to answer as many problems correctly as possible, and allowing the Player to avoid him longer in-game. While he will still become faster should the Player answer a problem incorrectly, the speed curve will gradually increase independently over time. Thus he will eventually speed up more and more on his own, with correctly answered notebooks affecting him less and less. After a certain amount of time, Baldi's speed will become so fast that he will be practically impossible to avoid, meaning that in order to achieve a high score, they must get as many notebooks as possible in his easier phase at the beginning. The longer the game lasts, and the more notebooks the Player collects, the faster Baldi will become overall.

Retrieved from "https://baldis-basics-in-education-and-learning.fandom.com/wiki/Endless_Mode?oldid=83837"
Community content is available under CC-BY-SA unless otherwise noted.