The Baldi's Basics series has a few endings that correspond to the decisions made by the Player before they complete the games.

After completing Floor 3 and pressing the button in the elevator, the Player will go in an empty room presumably Baldi's Office. There are some balloons and a desk. A Tape Player is standing above the desk. Behind the desk, Baldi is standing there and is singing to the Player. Just a few seconds later, the screen starts to corrupt. The game switches to a distorted and randomly-colored version of the BadSum screen with text saying:

BALDI_ENDING.EXE HAS
ENCOUNTERED AN ERROR(S):

After completing any of the challenges, an image with Baldi giving a realistic thumb and a message appears saying:

Wow, you did it! Baldi gives your
performance a up! See if you can
win them all! 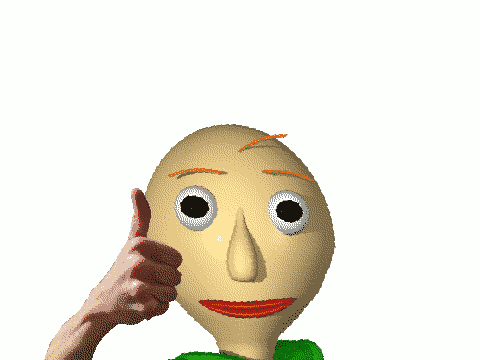 At the bottom right, there is a "Main Menu" button, which leads to the title screen once it is clicked.

The normal ending will end with the message, "CONGRATULATIONS!!!! YOU WON!" and have Baldi standing by the chalkboard, like the title screen of the game, but with a simplified color palette. Filename2 speaks to the Player for a brief moment, saying, "Wow, great job. *statics* Please try and do worse though I need to- ████████". The game closes after he finishes speaking.
The alternate ending (also known as secret ending) is found if the Player fails all 21 questions on all 7 notebooks. A tip to get the alternate ending is to collect notebooks slowly, because collecting them fast makes Baldi move quicker. Upon touching the final exit, the Player is teleported just outside of Baldi's Office, in front of a texture that says "You Won! There's room for improvement though... Go see Baldi in his office for some tips!" Behind the text, the Player can see a Baldi head frowning. Upon entering Baldi's Office, Filename2 speaks to the Player for a bit before the game crashes. It is very difficult to obtain this ending as Baldi moves very, very fast.

The way to reach this ending is very similar to the normal one in Baldi's Basics Classic. However, in this version, the game forces to the Player to reach the exit door in the Cafeteria last. After reaching the last door, Baldi, Playtime, Principal of the Thing, It's a Bully, Gotta Sweep, Arts and Crafters and 1st Prize surprise the Player, and Baldi then invites them to blow out the candle on top of the cake. Once the Player blows out the candle, the entire Schoolhouse will become dimly lit, and the rest of the characters will float up to a similar height to the Player, but they will not be interactive or be able to move at all. The Player will be able to float over the floor to leave the elevator platform, and on either side of the top of the Cafeteria, there will be an entrance to a hallway that leads to the Glitched School that is located above the school. There will be an ambience of extremely rapid ruler slaps at random intervals and volumes, though Baldi is not the source of the sound. Two of the glitched rooms contain notebooks that function normally, though they play a strange remix of Baldi saying "one" and "you" over and over, which also sounds like the "Learn" track. Obtaining these notebooks will not affect the game, but the notebook counter will increase. After the Player gets a problem wrong, a pitched down version of Baldi saying "You need to collect 2 notebooks before you can use these doors." will be heard. One of the glitched rooms leads to the puzzle room. Once the Player enters the correct count of SpoopBalloons, a wall will open to reveal a room with a circle of chairs and a chalkboard, and Baldi saying "WOW!" can be heard. When the Player enters the room, the game will begin to spawn red SpoopBalloons that come out of the walls and follow the Player around making a glitchy noise. Distorted Baldi posters will also begin appearing on random walls.

Filename2 can found in the Principal's Office, able to be reached after the schoolhouse turns dark if the Player uses the Teleportation Teleporter or types "53045009" on the You Can Think Pad in the Glitched School. He is once again surprised by the Players wit and intelligence in finding him, but is disappointed that they have not destroyed the game yet. He warns them again that something bad will happen if they do not, and the game crashes.

This ending appears to be a winning screen when the time runs out while the Player survives by constantly putting logs into the campfire. When this happens, it will say "Wow-time you won!" as it will tell the Player their final score and would say at the bottom. This is where the Player get some great rewards based on their score in Baldi's Basics Plus. It also plays a little jingle that is similar to the title screen. However, the jingle plays in a rather different tone.

After collecting all 8 notebooks and entering the functional elevator, a look of Baldi's face but up close will appear, and will congratulate the Player saying,

"Congratulations! You beat my demo!"

Although, for whatever reason, Baldi's voice is glitched out, somewhat similar to the sound of a radio losing signal. After Baldi's speech, Baldi's mouth remains open, and his nose, eyes, eyebrows, and mouth turn completely black.

After some time, the game closes.

After completing the third floor in Hide-and-Seek, once the Elevator's intermission screen closed up, the Player will be brought to an empty but infinite black room with Baldi solely idling. Turning or looking back, there is a message which reads:

Some day, you will get the
satisfying, canonical, and exciting
ending that you deserve.

Today is not that day.

A few seconds later, a dabbing Baldi appears and begins to shake, accompanied by a loud bass-boosted sound.

Note that the word "horribly" is misspelled as "horrily" and there are missing punctuation marks. The message mentioning the game being poorly compiled references that they need decompile the game to see it. This Easter egg was also briefly mentioned by mystman12 in the second Baldi's Basics Classic Lost Bits video.[2]

Retrieved from "https://baldis-basics-in-education-and-learning.fandom.com/wiki/Endings?oldid=110443"
Community content is available under CC-BY-SA unless otherwise noted.