Susan is Baldi's wife who appeared twice in the series.

In Hair Brush, although not appearing on-screen, she asks her husband Baldi for the hairbrush that Baldi was eating. In Realistic Face, Baldi's wife wanted her husband to change himself back after using the invention but he feels happy because he thinks it will give him more hair.

Baldi having a wife may or may not be deemed as canon.[1]

Andrew is Baldi's son who appeared in Rag Tom Floppy Shirt where he was watching the television show throughout the comic strip.

mystman12 is not sure that Baldi having a son is considered canon or not.[2]

Rag Tom is a titular character of the fictional TV show Rag Tom Floppy Shirt, a horrible SpongeBob SquarePants parody. He is mentioned in the comic of the same name, although he is not physically seen. While his son is watching the show, Baldi thought Rag Tom is being "weird", describing him as a childish, full-grown man.

The audience of "scientists" appeared in Realistic Face. As Baldi shows himself as "realistic" after using his invention, the entire "scientist" audience are silent with one of them saying "Ummm?!" in a bewildered reaction.

A group of unseen baseball player kids appeared in Ice Block, where they played baseball outside and Baldi has to use the ice machine to defend himself from getting hit.

TimTom appears in Ice Block comic and he constantly throws a baseball at Baldi's head as a running gag in the comic strips. It is possible that TimTom would actually be an antagonist toward Baldi.

He was planned to appear in Baldi's Basics Plus when he shows off Ice Block comic,[5] but it was later confirmed that he will not be implemented in.[6]

An unseen referee appearing in Comics Made by Baldi starts a fighting competition before the fighters will start fighting. 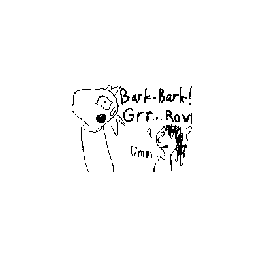 The unnamed character from TestComic, a one-frame comic used as a wall texture from the game files since Full Game Early Demo, and the Development Build footage.

In this comic, the character (who appear slightly similar to Playtime in a few ways) is shown as looking bewildered by Baldi's dog impersonation. It is possible that this character may be Susan.