Some kid drew this face and next thing you know it's floating around, laughing and making mischief.

Chalkles appears as a scribbled face drawn in chalk. The circular face is drawn with a "mustache", two buck teeth, a comb-over, a button nose, glasses, and two eyes. The left eye is bigger than the right.

Chalkles' description from the Principal's office suggests that he loves causing mischief around the Super Schoolhouse.

Upon entering the classroom, Chalkles will appear on an empty chalkboard in one of the classrooms, slowly manifesting in it. The player has 15 seconds to leave the classroom before Chalkles pops out. After said time in the room when Chalkles becomes completely solid, he will pop out of the chalkboard and then rotate around the room while making a creepy laugh-like sound, attracting Baldi's attention to Chalkles' location and preventing the player from escaping the classroom for a few seconds.

Chalkles will stay active for at least 25 seconds. After 15 seconds, he ascends to the ceiling, distorting and clipping through. He will finally leave after 10 seconds. At that time, the player will now be able to open the classroom door.

It is, however, possible to escape the room when Chalkles become solid, by:

If the player wears the Faculty Nametag, Chalkles will disappear. Even if the item's effect expires, he will not spawn until they enter the room without the Nametag. However, when using this item after Chalkles spawns, the player cannot open any door right away.

Along with It's a Bully, Beans' bubble gum and using the BSODA to try slowing down or pushing Chalkles will not work. 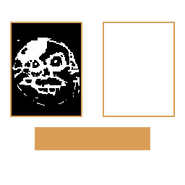 Chalkles' poster in the Principal's office. 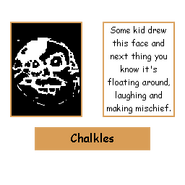 Chalkles from the Baldi's Basics Plus alpha screenshot.