The campfire is a campsite fire from camping as a field trip quest in Baldi's Basics Plus.

The campfire has a modeled CGI fire with red, orange, and yellow colors. Underneath the fire are wooden logs.

The player's job is to keep the fire running. Each campfire contains math answers for the questions which are on the logs. When hovering the mouse between fires, purple arrows will appear and can be clicked to switch the campfires' positions. If logs land into the incorrect campfires, the fires will go out or grow bigger suddenly depending on the answer of these logs, and the player will lose one star. In the Field Trips mode, the score will be added by campfires with correct answers. For example, if there are four campfires and two of them have incorrect answers, the player will get 2 points.

Prior to V0.3, the campfire was poorly-drawn, and the wooden logs' design was a model. The player had to put log items in it to keep the fire burning. If the campfire goes out, Baldi would appear next to the logs which were where the campfire was previously on and he will start chasing the player with his ruler. The fire will become smaller when it is getting dimmer. The player would be able to tell how well the campfire was doing based on how big the fire sprite was. The bigger it was, more points the player would earn until the timer reaches to -1. About 30 seconds or more time later, Cloudy Copter would descend into the ground and blow the campfire. He would make the fire reduced twice as fast if the player was not near the fire.

Arrows to switch the position of campfire.

Animation of fire extinguishing when the answer is lower than the campfire's number.

Animation of increasing the flame in the fire if the answer is higher than the campfire's number.

One of the textures for the old campfire's log seats.

The campfire model in Baldi's Basics Plus, prior to V0.3. 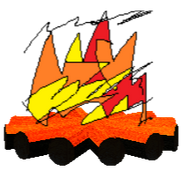 Ditto, but without the fire sprite.

A teaser image of the old campfire in the camping field trip.

The old campfire in a screenshot of Baldi's Basics Plus alpha screenshot.

The campfires in a screenshot of Baldi's Basics Plus early access screenshot.

The old campfire used for the clip hanger of Baldi in his camping outfit.