Basically, Games! is a small indie team behind the creation of Baldi's Basics, founded since July 2018 lately after the release of the classic version of Baldi's Basics. Currently, mystman12 is the creator and only developer of this team, while his sister Cady works on composing soundtracks.

An HD quality Baldi head used for the Twitter and itch.io avatars. 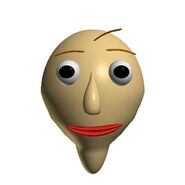 Baldi's head for the Basically, Games! former logo.
Add a photo to this gallery

Retrieved from "https://baldis-basics-in-education-and-learning.fandom.com/wiki/Basically,_Games!?oldid=84893"
Community content is available under CC-BY-SA unless otherwise noted.