For the subject, see Math.

Baldi's Math Machine is a math-teaching machine in Baldi's Basics Plus.

Baldi's Math Machine is a gray cube-shaped machine with text saying, "Baldi's MATH MACHINE" at the bottom, and displaying a math problem in the center. On the top right, there are two lights to display whether the answer is correct or not, a yellow horn, one thermometer, and two gauges.

Prior to Baldi's Basics Plus V0.2, the design was completely different as it was subject to change. It was a gray cube-shaped machine with text saying, "The Math Machine", displaying a math problem in the center, and the bottom of the machine says "(Design not yet final)". Plus, Baldi's Math Machine reduced 5 You Thought Points when the wrong number balloon is used and it does not spit out a notebook. The old side texture was the conveyor belt texture.

Its current purpose is to serve as an alternative to the You Can Think Pad in Baldi's Basics Classic, Birthday Bash and Classic Remastered. It displays a math problem on the screen and the player must solve it by picking up the number balloon that matches the correct answer to the math problem. If the wrong number balloon is put into the machine, it will buzz and attract Baldi to the machine. Also, Baldi's slapping speed will increase in frequency because he got angrier because the player answered a math problem incorrectly.[1] However, if the right number balloon is put into the machine, a ding sound is played and the player earns 25 You Thought Points. Baldi will be happy and stand still for five seconds after answering the problem correctly and he will not harm the player while in a happy mood. Whether the problem is solved correctly or not, it will spit out a notebook and all the number balloons in the room will pop.

When a notebook respawns in Endless Mode, the problem will reset, so the player has to solve the new problem to get a notebook.

Baldi's Math Machine can also block the vision, so other characters cannot see the player behind the machine and vice versa. However, Baldi can see the player through the machine if he is attracted by a buzzing noise for answering the math problem wrong.

It can be found in several classrooms, commonly on floors 2 and 3. Every classroom with Baldi's Math Machine will also have single-digit Number Balloons floating around the room.

There are 6 classrooms with Baldi's Math Machines. Only one classroom does not have this. 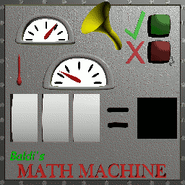 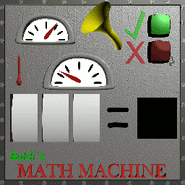 When the right number balloon is used. 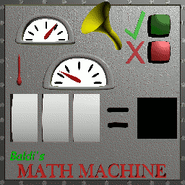 When the wrong number balloon is used. 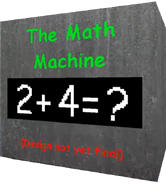 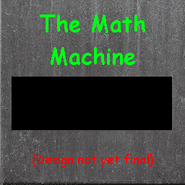 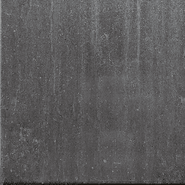 The previous texture for other sides.