Please use proper style when trying to edit the page.

Please use American English in the article, as the Baldi's Basics series was released in United States of America. Here is examples:

Baldi's Basics Wiki refers to the player as both a playable character in the Baldi's Basics series and the user who plays the game from this series. Using the word 'you' on any main article content refers to the reader of this community, unless the content is copied from official material.

Please use 'the player' and 'they' in any main article content for the aformentioned reasons. This also applies to the characters with no specific info for the gender, but in this case, only 'they' term is used.

This style is only for main namespace. There is no restriction for the font style on other namespaces like user page or blog post.

Every article title must has singular form, unless the plural term is used in the official series. It makes easy to make a link like [[character]]s, the "s" letter for plural form will automatically link to a singular word - character. However, the bold text as a title on the top content and the displayed title by using {{DISPLAYTITLE:}} magic word can have plural form. - See the poll result

Alternate names depending on games

Note that WD-NoSquee has '(Door Type)' text in Classic/Birthday Bash, but this community still uses just 'WD-NoSquee' instead.

All character names must follow this capitalization or punctuation style when editing a page. The first word of the character name always starts with the capital letter.

Like character's name, all item names must follow the capitalization and punctuation style from official item names. Even if some items are written differently in other places (e.g. Johnny's Store description of Big Ol' Boots), the community follows the item's name from the inventory.

In the trivia section of any article, the range of versions are stated as below:

The cut content is the content that went completely removed from the game or got cancelled during the development.

Note that if the content has some differences between the previous and current versions, but it is still used on games, it is not discontinued. In that case, it should be listed in version differences.

Every file must have descriptive file name, so the user can easily figure out the purpose or usage of the image.

Keep the filename as original. When you try to upload a texture or sprite from asset files, make sure to remove the asset's path.

Every audio file must have .ogg file format. It is because other file formats may not support audio widget on Fandom.

If you want to upload a file, but there is already a file with the same name, you can add additional words depending on the game/demo name or the latest version when it is used for the last time. Files with no additional name are usually used on Baldi's Basics Plus, or if there is no such file in Plus assets, then it is often supposed to be used on Baldi's Basics Classic.

A format when the file name starts with a lowercase letter or there is an underscore in the asset files:

A list of additional names based on the game/demo name and the latest version:

Some categories can only be used on a specific namespace.

Some templates can only be used on a specific namespace.

If there are audios with both caption and transcript:

If there are audios with both caption and transcript, but there is no sound with different transcript:

If there are audios with caption only:

If there are audios without caption only:

If there is at least one sound with caption:

If there is no sound with caption:

If the audio is too loud or static, the {{LoudWarning}} template is added in the description. Optionally, the caption or transcript can have bold text, if it is extremely loud.

If the caption starts with the * (asterisk) mark, please add <nowiki> tag to the first asterisk mark. This tag is not needed for second or other * marks. Here is the example (Main: TimedText:1PR Motor.ogg.en.srt):

List of official caption files from Baldi's Basics Plus:

If the color of caption is different from the default caption color of any character or other element, then the following line will be added at the end of the description:

The caption's color {for ("quote/sound") quote/sound} is (the color of the caption) instead of (default caption color)<the reason for the different color>.

Note: This is the setting for the gallery section. Gallery sub-pages will have different format.

Tabber tag is not needed if there is only one category for the gallery.

Usage of the word "Ditto"

If there are other images with same caption as the first one, then the word "Ditto" is used instead. This is used for reducing redundancy.

Baldi talking in his camping outfit. 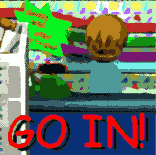 An entrance to Johnny's Store with the red "GO IN!" text. 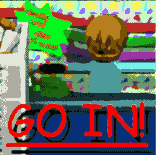 Ditto, but the text is underlined.
Community content is available under CC-BY-SA unless otherwise noted.
Advertisement
Follow on IG TikTok Join Fan Lab