Baldi's Basics Classic (or Baldi's Basics in Education and Learning[1]) is the original version of Baldi's Basics Plus that was first released on itch.io on March 31, 2018, by Basically, Games!. It was released on Game Jolt on May 27, 2018. Although it was partly but not completely a full game, it is available on itch.io and Game Jolt for free as a similar type of "demo", only consisting of 9 characters, 11 items, and only one subject (math) in the non-randomly generated Schoolhouse with no other big amount of features.

Soon after V1.3.2 was released, on July 24, 2018, a Kickstarter was launched, made to have Baldi's Basics full game with new characters, randomly generated maps, new subjects, field trips and more.[2] The Kickstarter successfully reached his goal with $61,375 pledged out of $50,000.

This game is not what it seems...

Inspired by creepy/bad edutainment games from the 90s, (Sonic's Schoolhouse, I.M. Meen, 3D Dinosaur Adventure: Save the Dinosaurs), Baldi's Basics is a meta horror game that's really weird, with no real educational value to be found. Collect all 7 of the notebooks and escape the school, all while avoiding Baldi. Baldi has many friends in the school that will slow down your progress and put you at risk of being caught, so learn how each character works and how you can avoid their attention. Find and use items to your advantage. Oh, and finally, try not to get the quiz answers wrong... Each wrong answer makes Baldi angrier...

This game is not what it seems...

Inspired by creepy/bad edutainment games from the 90s, Baldi's Basics is a meta horror game that's really weird, with no real educational value to be found. The goal of the game is to collect seven notebooks, and then escape the school, but that's easier said than done! You'll need to learn all the ins-and-outs of the game to come up with a winning strategy and avoid being caught by Baldi. Learning how to use Baldi's friends to your advantage, wisely managing the items found throughout the school, and memorizing the layout of Baldi's school are all keys to success!

This game has two modes, story and endless!

• Story mode requires you to collect 7 notebooks and then escape the school to win. The more notebooks you collect, the faster Baldi will become! Simple, but very challenging.

This is an official port of the original game, with touch screen controls! Check out the options menu to adjust them to your liking!

At the start of the game, Baldi appears, greeting and waving to the player. As the player goes on to collect the first notebook they will be greeted by the You Can Think Pad showing a set of three math problems, presented by Baldi. In the first round of the math problems, everything is normal. However, when the player activates the second notebook, the third and final question is replaced by an unintelligible string of numbers, and Baldi's voice will become glitched and distorted. This question has no correct answer and replaces all final questions from the second notebook onward.

Upon getting a question wrong, Baldi will start to chase the player, his speed being determined by slapping sounds from his ruler hitting his hand. It is at this point in the game that the other characters will begin appearing. The more questions the player answers incorrectly, the faster the Baldi will chase them.

Once the player finds all 7 notebooks, Baldi will congratulate the player before he screams, "GET OUT WHILE YOU STILL CAN!!!", followed by a laugh. Baldi will now be moving at his fastest as there are no more notebooks, thus no more questions to get wrong. Now the player must find four exits in any order. Once the player finds one of the exits, everything will become red and the doorway will become a solid wall with a school map on it. Three of these exits are fake, the last one the player reaches being the real one they can finally leave out of. Before the player tries to exit, a loud noise is heard in the background.

This game was an entry in the annual Meta-Game Jam, and received 2nd place in the Meta-Game Jam, with Farfalle OS in 1st. It has gained high praise from its fans, developing a large fandom. The game has reached over 1 million downloads and is still growing.

Cover in the campaign tab of the Kickstater page.

Old itch.io banner of the game.

New itch.io banner of the game. 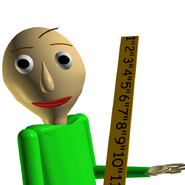 Testing Baldi's Basics Classic on iOS device, found in one of the Kickstarter posts.