Purchasable games are known for containing anti-piracy elements, checking for alterations to the games alongside the existing copy-protection. The cracked copies contain various altered effects in gameplay different to legal copies, making any attempt to beat the games completely impossible. 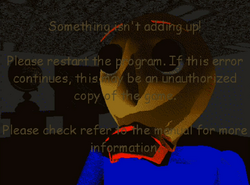 The "BadSum" screen prevents the non-backers or backers who only donated less than $30 from playing the game regularly. This can also be accessible to backers who donated $30 or more if they copy and paste the Kickstarter Exclusive Demo folder and play the game in the copied file. Upon starting, the Basically, Games! team's logo first shows up normally. But instead of the main menu, the screen shows a dark image of a character resembling Baldi but in a blue shirt, without a hair string, a frightened face, and large pupils. The background shows a room similar to Baldi's Office, while some eerie music is heard playing. The text reads the following:

Another pirated version, which was cracked poorly, is somewhat playable. The first level starts off as normal, but when Baldi starts to chase the player, the game triggers a slight number of known effects that make it impossible to beat the level:

The "BadSum" screen displayed in the pirated Kickstarter Exclusive Demo.