Distracts Baldi after it rings

Set this clock up and when it goes off, Baldi will want to check it out! Unless he sees you of course, he's not *that* stupid.

The Alarm Clock is an inventory item in the Baldi's Basics series.

The Alarm Clock has a blue rim with two black stands on the bottom of it. There are four lines signifying 3:00, 6:00, 9:00, and 12:00. It has a white interior with the word "TIME" written on it, replacing the arms, and two gold bells on the top. Although the Alarm Clock appears to be small as an item to pick up, it appears to become very large when the player places it.

The Alarm Clock still works despite having no hands.

After using the item, the Alarm Clock will be put down on the floor, and 30 seconds later, it will start ringing. Once it rings, Baldi will become aware of it and begin moving towards it. Baldi prioritizes the Alarm Clock's ringing noise over any sound with a noise value lower than 112 and will continue to move towards it until he either reaches it or sees the player. This means that until Baldi reaches the Alarm Clock's location, the player can open doors and blue lockers, reach exits or elevators, and even get sent to detention without Baldi noticing them (as long as the player does not enter Baldi's line of sight). The Alarm Clock will also have an after-effect on Baldi's hearing for a short time.[1][2]

The Alarm Clock is useless if it rings in the library because this location is silent, which means Baldi won't go to where it was placed.

The Alarm Clock is commonly obtained from both classrooms and faculty rooms. The Alarm Clock can also be bought at Johnny's Store for 50 You Thought Points.

The big Alarm Clock sprite that appears when the item is used.

An Alarm Clock as seen in one of the ending screens. Note that the color is purple instead of blue due to a different dithering effect being used.

The already-used Alarm Clock from the Baldi's Basics Plus early access screenshot. 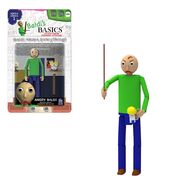 Alarm Clock in one of the Kickstarter images.

Alarm Clock from the "Rewards" header from the Kickstarter page.